To support the exchange of knowledge between archaeological projects and local communities, InHerit offered a Bidirectional Knowledge Exchange Grant between 2011 and 2014. The advancement of collaborative and participatory research was evident in the innovative projects that were funded, including collaborations with local spiritual leaders, trips to Chichén Itzá, and lessons on hieroglyphs. Check back soon for more details on each of these important collaborations! InHerit joined with the Universidad del Oriente, Valladolid, to begin a new community-based archaeological project, PACOY (Proyecto Arqueológico Colaborativo del Oriente de Yucatán), in the Summer of 2012 with a grant from the National Science Foundation’s Catalyzing New International Collaborations Grant.PACOY was conceived by co-investigators A. Ivan Batún Alpuche (UNO, SEDESOL) and Patricia A. McAnany (UNC-Chapel Hill, InHerit) as a collaborative venture located in the eastern part of the Yucatán that would be conducted as a community archaeology project. Meeting with community members and creating ways to gain feedback from the community were important parts of PACOY from the start. Given the wealth of untapped colonial archaeology in eastern Yucatán, the project initially focused on reconnaissance and survey of locations with colonial missions. After surveying more than 30 villages, the project chose to focus on the town of Tahcabo. Situated in the wetter, eastern half of Yucatán, Tahcabo appears in colonial tribute lists as a place of apiaries from whence honey came. Its name could derive from this production specialty. During colonial times, bee’s wax was highly valued for making candles and this fact may have increased the strategic importance of Tahcabo, and may explain the massive size of its ruined mission church.

Currently, PACOY team member Maia Dedrick is investigating the use of rejolladas — dry sinkholes with deep, rich soil deposits — as locales of cultivation for surrounding communities during prehistoric or colonial eras. Additional excavations of colonial-era households in and around Tahcabo are planned for the near future.

Additionally, it is clear that the citizens of Tahcabo are intensely interested in learning more about the deep histories of where they live and have been frustrated by the lack of access to information about the past. Old structures in the communities—such as the colonial church—are perceived as important places that need to be conserved, but community members admit that there are few resources with which to develop a conservation program. With the generous support of a site preservation grant from the Archaeological Institute of America (AIA), PACOY and Tahcabo have established a community museum with cultural and historical information about the town drawn from archaeological sources and historical documents from Dr. Batún’s research at the Archivo General del Estado de Yucatán (AGEY). A heritage trail that starts at the museum winds through streets and past locales deemed historically important by the town, with information posted on signs in Spanish, English, and Maya.

Check our blog for more information about this ongoing program!

In 2009, InHerit worked with our partners Arte Acción Copán Ruinas and Spanish archaeologist Argi Diez to give rural children in Copán the opportunity to experience what it is like to be an archaeologist. The community selected, La Pintada, was already involved in InHerit’s Maya Project, which introduced them to the concepts of archaeology in its monthly workshop; however, this was the first opportunity for students to work hands-on with the past.

The “archaeological site” selected was a Ch’orti’ home abandoned three years prior which the children named Casa Los Sapos for its proximity to an ancient Mayan fertility site. Over two months, kids from La Pintada became archaeologists: learning techniques of ethnohistoric investigation, measuring, mapping, documenting, drawing, and interpreting the site.

Building from our experiences at Casa los Sapos, InHerit established an extra-curricular program in Archaeology at a new secondary school in the community of San Rafael attended by youth from three local communities (including Casa los Sapos alums from La Pintada). The program gives students an opportunity to study archaeology more in-depth with the help of local and foreign archaeologists who volunteer to share their knowledge in the monthly class. InHerit is in discussion with the Institute of Honduran Anthropology and History to provide students with a certificate of completion that may help them to find employment as technical assistants at the nearby site of Copán or, someday, to enter the new major in Archaeology at the National Autonomous University of Honduras in Tegucigalpa. 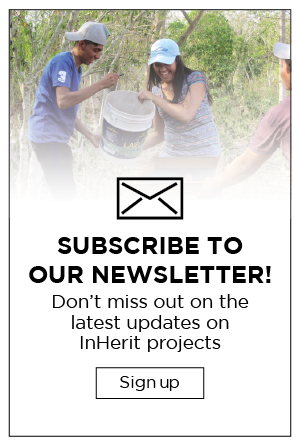