Native American people have been central figures in every era of North Carolina history, including the history that is unfolding around us today. Native people are the original inhabitants of the land that we now call North Carolina and have lived in this place for tens of thousands of years. Today, North Carolina is home to more Native American people than any other state east of the Mississippi River. Numerous tribal nations and urban Indian organizations are rooted in North Carolina and the bordering areas of adjoining states including the Catawba Indian Nation, the Coharie Tribe, the Eastern Band of Cherokee Indians, the Haliwa-Saponi Indian Tribe, the Lumbee Tribe, the Meherrin Indian Nation, the Occaneechi Band of the Saponi Nation, the Pee Dee Indian Tribe, the Sappony, and the Waccamaw Siouan Tribe. Unfortunately, however, Native stories and contributions are often overlooked when we teach students of all ages about the history and cultures of North Carolina.

The Amplifying Native Voices in North Carolina History project focuses on remedying this gap in Native stories and contribution through developing a curriculum that focuses on Native experiences in the Carolinas between 1491-1830, a period for which North Carolina teachers indicated a need for additional resources. This curriculum encourages students to investigate this history through analyzing primary sources about key topics including first contact in the Carolinas, Native Slavery, the Deerskin Trade, and Native Foodways. Importantly, our goal is to highlight the agency of Native peoples throughout history and today. 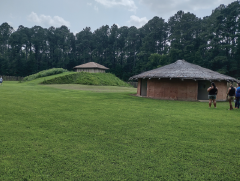 The following is a periodization of Amplifying Native Voices teaching materials, including lesson plans.
Native Peoples before Carolina – Prehistory to 1540
Contacts and Connections - 1521 to 1670
Slavery, Commerce, and Conflict - 1670 to 1730
Negotiating Autonomy and Dependency - 1730 to 1750
Linked materials coming soon.
Revolutions and Assimilation - 1750 to 1815
Civilization Plan
Removals and Resilience - 1816 to 1845
Linked materials coming soon.
Additional Resources
↑